A few weeks after its opening, l’Usine (www.usine.io) organised the first French edition of Makethings (www.makethings.io). Quoting their website, “Make Things is a series of free workshops for people who want to dive into the world of hardware, learn about the Internet of Things, programming, DIY and electronics”.

I had known the event for a while as I had seen it take place in other european cities, but never had the chance to attend one, so I was more than happy to hear it was coming to Paris. Things only got better when I was asked to be in charge of one of the workshops !

After having a look at the different ideas, I decided to oversee the wearables workshop : there were already a large range of “traditional” workshops, from the simple introduction to Arduino to more advanced subjects, but I liked the idea of teaching people (some of whom were just getting started with microcontrolers) that it did not have to be all about soldering or using a breadboard. 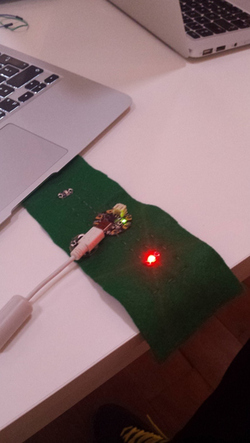 I sticked to a real simple circuit, using a Gemma, a few LEDs and a pushbutton that the participants could sew on strips of orange and green felt. Some other components like light sensors were also available for those who finished earlier. It was really rewarding to see some users who had never used sewn or used an Arduino managing to get nice results, some of them even staying longer than the 45 minutes every workshop was supposed to last to finish their project or make it better.

Overall it was a fun day, and as the community of Arduino users in Paris is, in my opinion, not very diverse yet, most of them had never heard of microcontrolers in this type of form factor.